A Fine Week for Sailing

Cliffport! As soon as the party arrived, they quickly scattered to find supplies, a ship, henchmen, and items. The warlock wandered over to look at the market; while he was unsuccessful in locating anything interesting to purchase, he did in fact uncover a secret; perhaps his quest for knowledge had been divined? Whatever the reason, he was given an envelope, upon which was written "Knowledge". On the reverse, the wax seal seemed to be an irregular circle with a bump in the middle. After carefully checking for magic (none on the outside, but there did seem to be a tiny magical mark inside - perhaps a watermark?), the warlock opened the letter, uncovering what appeared to be a page, torn from a book, upon which was written a poem, and some sort of map on the edge. Initial eyeballing didn't manage to match up with anything near the location of Falach a'Bhaile, the mysterious Gnomish city. Apart from the dwarven sapper, Morthor decided not to show the map to anyone just yet. 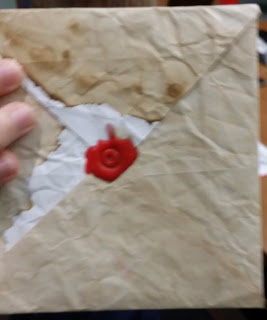 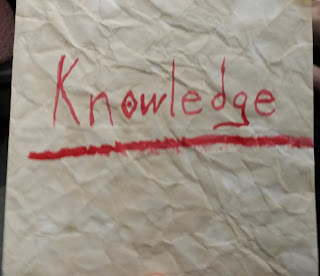 Meanwhile, Caranthir found a few options for transport: the Lady Luck, a sleek, fast ship captained by "Captain Redbeard, Ge'n'l'm'n Adventurerrr," complete with a parrot on his shoulder; the Santa Angelo, captained by merchant Juan Diego Montoya Fernando San Lucio Del Richo; and the HMS Reliant, under Captain Joshua Dowds, Coastal patrol, Mareten. Opting for safety over speed or luxury, the party chose the Reliant. As it was to leave in the morning the next day, the party was free to wander about town for a little while longer, at least.

Llarm decided to go to the cliffs to look at the ocean - something she'd never seen before. While there, she heard many high-pitched voices down below on the cliffs, though she didn't speak Fae, and thus couldn't understand them. Not could she see them, for some reason. Morthor, however, could; completing his tour of the market stalls, he and his daughter headed to the cliffs. He caught wisps of their conversation; it was, it seems, a large group of pixies that had come to look at the ocean; Fae and water don't mix well, so they were staying well back, sure that the water would leap up and kill them. Morthor considered climbing down the cliff face with his rope, but decided to instead take the longer route and walk to the beach below. Once there, his daughter called up to the faeries; they were not pleased to see them. Enraged, the entire group revealed themselves - all 30 of them! Morthor quickly entreated them to remain calm, but was only barely able to restrain violence. The leader buzzed down and demanded why they were trespassing on his land (as it happens, faerie-folk, especially the smaller varieties, are apt to believe that "land I can see" and "land I own" are one and the same). Morthor explained that his daughter wanted to see the faeries; rudely, the pixie hissed at Alice, said, "There, now you've seen one," and flew off. It was probably for the best; pixies are more like Tinker Bell of the old Peter Pan stories, apt to try to kill you because you blocked their view. Or turn you into something unpleasant. Morthor got off easy.

As for henchmen, several were looked over, but ultimately passed over. The hope was that once they sold all their eggs, they would level up; a sensible plan. The next morning, they boarded the Reliant; not the most comfortable voyage, but no one seemed to get seasick. A day into their journey, they met a strange fellow - well, observed, anyway. He shot past on a hastened broom and was soon out of sight. The next day, the wind turned, and their travel was slowed to a crawl. That afternoon, the lookout in the crow's nest suddenly shouted down with panic in his voice: "Dragon turtle!"

Far in the distance, the hulking shell was visible. The captain called for rowers, hoping to outdistance the creature if need be. As everyone watched, flashes of lightning and gouts of flame lit the darkening sky! Steam welled up, obscuring the monster. As the sun set, all eyes remain on the clouds. The captain decided to push ahead through the night; it would tire out his sailors, but hopefully keep the beast away. As the clouds of steam part, the massive shell slid out; the captain called for the rowers to throw their backs into it, and the ship lurched ahead - but for naught! The creature easily caught up to the ship... except it wasn't a dragon turtle. Well, not much of one. Just the shell. And a mage sitting on top. The man hailed the ship - "Haloo! Mind if I board? I don't fancy spendin' the night in a stinky shell! I'll just tie it on, shall I?"

As it turned out, the mage, Lucious, was the dean of Wrapport Mage College; he was researching some rather powerful magic, and needed three dragon turtle shells to complete it. As he explained it, it's not hard fighting a dragon turtle, as long as you are invulnerable to its steam breath and stay out of reach of its claws and bite. And are, y'know, a 13th level mage. He's not the most powerful mage in Mareten, but only just. He is, however, one of the most active; he regaled Llarm with tales of how he blew up various things, including his college and various associates. Morthor inquired if he knew anything about the envelope, but he only shrugged and suggested he try the mages in Riverbend. As payment for staying on the ship, the mage changed the weather to blow them to Wrapport, where they arrived the next day. He bid everyone adieu and left with his shell.

In Wrapport, Rig managed to sell off another egg; the party looked around for magical items, but blanched at the prices. Yes, a ring of invisibility is not cheap. Deal with it. Onward! The ship departed for Slowhaven; the weather was good, but on the second day, the ship was beset by 6 sea serpents! The first volley resulted in the death of one of the serpents, and so began the long slog. Four serpents dove for the marines and party members, managing to scarf half-a-dozen marines in the first go; the last serpent wrapped around the ship, squeezing it in an attempt to destroy it. After the first round, many fewer hits were made - the party managed to bring down another serpent, and one serpent took a chunk out of a henchman; Morthor cast Choking Grip and stopped one serpent, momentarily - long enough for the marines to kill another monster. Finally, the last serpent was taken down, but not before it ate two more marines. Final tally: 6 serpents dead, 14 marines dead, 23 points of damage to the ship (hardly a scratch), and a few nicks and scratches on players and henchmen.

The crew hooked the sea serpents to keep them from falling back in the water; from their insides, they pulled out a wand, 3 magical swords, a rich fur coat, and a few trinkets. The captain kept the jewels, but allowed the party to keep the wand and swords. Magic and boats just don't go well together, he claimed.

After some inspection, it was determined that the third sword, a gleaming silver-and-white blade, was actually cursed. Morthor dimly remembered something about it; known as the Shining Deceiver, it was a -2 sword. Into the water it went - again. Hopefully for good this time. The second sword, a hardy blade with flames etched into the handle, was identified as Dragon's Bane, a +1 sword, and +3 vs. dragons (as a note: this includes Wyverns and Dragon Turtles). The remaining sword was discovered to be a +1 sword, but otherwise unknown; it had a large skull motif on the crossguard.

Traveling on without incident, the Reliant reached Slowhaven. Rig sold two of the baby hippogriffs, and Luce decided it was high time to get some reconstructive surgery. She rolled perfectly, and was able to recover her missing teeth and womanhood, at least after a week of rest. She's pretty happy about the result. The party purchased the services of a sage, and were able to learn about the wand (a wand of Detect Metals, with a least one charge), the unknown sword (Skullcrusher, a +1 sword/+3 vs undead), and the metal man: as it turns out, his experience as a fighter is determined by the copper inserted. 1 copper=1 xp; 100 copper (aka 1 gold piece)=100 xp, or a level 1 fighter. The inserted copper lasts 24 hours. Any experience gained from combat is returned as copper pieces, which meant that the serpent fight returned 1021 copper pieces (to Llarm, since he was the one feeding copper in). Also, copper can be inserted as needed; for example, the day could begin with 1cp, just to get him moving, then 1gp for when the party needs a fighter. The metal man only levels up from copper; experience gained is refunded upon command. His stats are: lvl X fighter, Int -1 (speaks broken Common; cannot write), +0 in all other stats; base AC of 4; Unarmed Fighting, Blind Fighting; immune to poison, hold, and sleep. Base movement 90'. He is a henchman, and takes a share of XP (if activated), but does not need to be paid (apart from activation money). He does not need to make loyalty rolls, and will never lose morale.

Morthor had the fur coat cleaned, and chose to wear it. All he needs is a huge diamond at the top of his staff, and he'll be pimpin'!

Last, but not least, the group looked for more henchmen. After pawing through dozens of candidates, the group decided to hire (these two do not get a share of XP or treasure):

GM Notes: Morthor, on his last roll against the faeries, hit what he needed exactly. They were very, very upset, and would likely have turned Morthor, his daughter, his dragon, and Llarm into blue-and-orange-striped toads without a second thought.

Lucious is the second best mage in Mareten, and most of the Wild Plains (the first is the dean of the Riverbend mage college). He does his own dirty work. As a note, a dragon turtle has 9,500 XP; he needs 3 shells for his research, which means it takes at least 28,500 XP, and an equal amount of gold. That's a pretty hefty magical item!