Finally, the party reunited. Rig, having spent some time hanging out around town, relayed that there was an interesting new dungeon discovered somewhere nearby; after some discussion, the party decided that they would take a look. As it turned out, the dungeon was... well, an interesting place. A funhouse, actually. Created by a mad Gnomish wizard.

Let that sink in a moment. 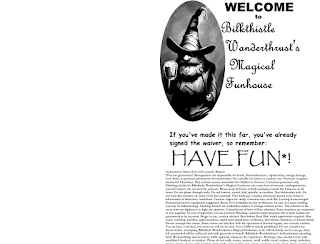 The rooms, it seems, were full of jump scares, puzzles, and various horrible tests. Two different tests included "basically doing nothing," in fact. One room sported a portion of a chess board; scraping the pieces across the board, the group managed to awaken a level 1 fighter by moving the pawn out of order, and a level 5 fighter, mounted, by moving the knight out of order. They didn't manage to awaken whatever was behind the queen and the bishop, much to my dismay, and their joy.

Not long afterwards, the party came across a room with a table full of potions; each person was to choose a potion, then drink it. Choosing from a rainbow of odd potions - none of which were anything the dwarf or gnome had run across - the party chose the following colors:

Wandering through yet more puzzles, they party managed to gather some magical treasure! Though two items were damaged, they did gain a pair of Eagle Eyes, a potion of Restore Life and Limb, a wand of Lightning Bolt, and a wand of Fireball. Eventually, the party made its way to the exit, where Luce was waiting. Happily, they found a small trove of treasure - piles of mundane items, along with a Staff of Wizardry, a Wand of Fear, a Helm of Teleportation (with no teleportation spell active), a shiny helm they decided was likely a Helm of Change Alignment, and a Necklace of Adaptation!